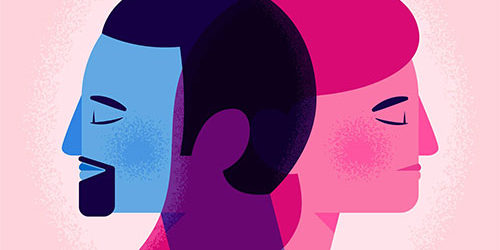 What is gender identity?

For some (the non-binary ones), they don’t identify themselves with a man or a woman and the idea of gender usually doesn’t feel relevant.

Some people develop mental problems because of the stress they undergo due to the confusion and mismatch between their biological sex and their gender identity. This is mostly seen in people from countries that don’t approve/accept people from non-binary genders.

People with gender dysphoria are usually under stress and anxious. Along with that they may have the following symptoms:

Children with gender identity problem often choose to pick the toys of other gender. They are happy playing with them and often display behavioural characteristics of other gender. However, every child picking or liking toys that are “supposedly meant” for opposite gender or behaving differently can’t be diagnosed for gender identity. Some children, following their mother or father can behave a little differently which will go away eventually as they grow up.

Children with actual gender identity problem undergo a lot of stress during puberty as they realize that their body doesn’t match with their identity. The issue grows up with them and after reaching adulthood, they may try to get their body parts changed to sync it with their mind.

When you realize that you or your child has gender dysphoria, it is best to talk to a qualified counsellor or sex therapist who can diagnose and address the problem. Dr. Karthik Gunasekaran from Metromale Clinic & Fertility Center, Chennai is one such highly qualified doctor who can provide you or your child with proper therapy and counselling.