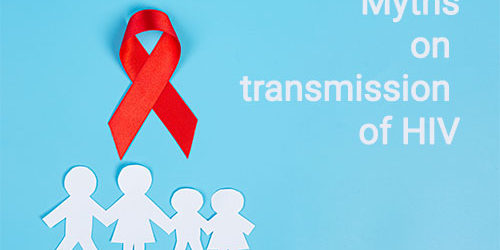 Did you know that around 4 Crore people around the world are living with HIV and yet there is no vaccination for that? Even though it has been decades since HIV has been infecting human population, there are several myths about the transmission of HIV among people. Some myths such as HIV spreads with sharing of food or towels or sleeping in the same bed etc. In this article, let us look at some of the widely spread myths about HIV and AIDS.

Myth 1: Getting infected with HIV means there is no further life.

This was once true, before 1996. After 1996 several anti-viral medicines were invented that can suppress the spread of virus in the body (called ART – AntiRetroviral Therapy).  As long as the person infected with HIV is under ART, he/she can lead a normal life like everyone else. However, they may need some counselling if they are depressed mentally.

Myth 2: You can guess if someone has HIV/AIDS just by looking at them

This too is a myth. During the initial days of infection, the person may have fever, rash, fatigue, unexpected weight loss etc. But once he/she is put on ART, he/she tends to lead a normal life just like anyone else.  When the person is suffering from AIDS, other infections may cause more harm due to lowered immunity and all one can guess/say is that the person is sick but not the exact reason why.

Myth 3: If you are straight male or female, you need not worry about getting infected with HIV

Again wrong! Transmission of HIV takes place when the body fluids such as blood, seminal/vaginal fluids or even puss like fluids are exchanged from infected to normal person. This transmission can take place between same genders or opposite genders depending on the type of activity such as exchange of needles, unprotected penetrative sex or sometimes even oral sex. The chances of a healthy woman contracting HIV from a man during unprotected sex is higher than a man getting infected from a woman.

Myth 4: You won’t get infected with HIV if you pee after unprotected sex

This again is not right. Whether it is a man or a woman, peeing after unprotected sex may not prevent transmission of HIV. When the seminal or vaginal fluids get exchanged between them during unprotected sex, it may not matter whether they pee after sex or wash their genitals with soap.

There are some conditions in this case:

There are many cases where a HIV positive mother has given birth to a perfectly healthy baby.

Myth 6: If you are HIV positive, you will become an AIDS patient

If an infected person starts ART as soon he/she is detected positive, compromising the strength of immune system takes a very long time as the medicines keep the viral load under control. This doesn’t give way for opportunistic infection resulting in AIDS condition.

Myth 7: HIV can be cured

It is very unfortunate that HIV remains untreatable just like several other viral infections even after science has made leaps and bounds of progress. We don’t have vaccine either to prevent HIV or tell the body to fight it off when infected. All that can be done is to put a tab on the exponential growth of the virus in the body using ART medicines.  There are several controversial theories that show complete remission of HIV but there are no approved treatment methods either by the FDA or any other medical authority in the world.

Myth 8: If you are on PrEP, you don’t need to use a condom

Well, this is not 100% true. PrEP stands for PreExposure Prophylaxis. Medical authorities recommend PrEP for sexually active men and women who involve in risky sexual behaviours. Medicines given as a part of PrEP have to be taken every day to keep oneself away from HIV infection. However, this doesn’t prevent transmission of other sexually transmitted infections.

As per some good sexologists like Dr. Karthik Gunasekaran, who also specializes in treating HIV positive people in Chennai, Tamil Nadu, people who are on PrEP and don’t follow safe sex practices are diagnosed with some kind of STD after a year. PrEP can be 100% successful when safe sex practices are followed, he says.

Myth 9: If you test negative in the first 30 days after unprotected sex, you are safe

Not really. Some tests just measure the antibodies that are released by the body when the body identifies HIV infection. If your body is not aware of infection even after 30 days, it may not release any antibodies that are detectable by some HIV tests. In such cases, your report may show negative.

You must always get tested after 90 days after participating in unprotected sex to be sure that you are HIV negative.

There are several tests that can done at different times post unprotected sex or risky behaviour to determine if a person is HIV positive, you can read about them by visiting the following article:

When to get tested for confirmed HIV results?

Myth 10: If both the partners are HIV positive, there is no need for a condom

It is still unsafe for both the partners to have sex without a condom even after both of them are HIV positive.

HIV cannot be cured as of date even with the great advancements that the medical community has achieved. Prevention is the only way to stay healthy. Avoid having unprotected sex with an unfamiliar or new partner or if possible, refrain from having sex with unknown people.  One episode of unprotected sex (either penetrative or oral) is enough to get infected; though the odds are less they are not 0.

Fix up an appointment
Go to Top
Call Now
This website uses cookies to track usage and to ensure that we give you the best experience while you are using it. If you continue to use this website, we will assume that you are ok with it.Continue