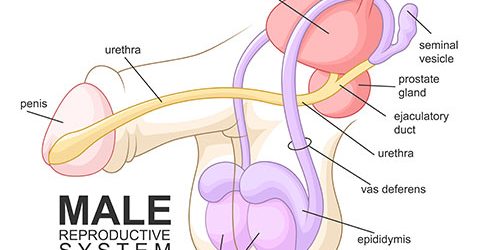 Summary:Testicular pain may be chronic or sharp; may be felt in one or both the testicles depending on the cause. There are several reasons that can lead to pain in testicles including testicular torsion, epididymitis, orchitis, injury or trauma, inguinal hernia, growth of lumps or tumors, kidney stones etc. Even a mild testicular pain should not be ignored because sometimes, that may be indicating a severe underlying cause that needs to be treated. Ignoring testicular pain can lead to surgical intervention or removal of testicles.

Scrotum is a bag containing typically two oval shaped balls that hangs below the penis of a male. The scrotum exists outside the body and is covered with a lot of skin that folds in itself. The reason for highly stretchable skin of the scrotum is to increase the surface area that can keep the testicles cooler than the body temperature. Higher the temperature of the scrotum, lower is the ability to function as reproductive organs. Testicles are primarily responsible for producing the male hormone, Testosterone and the vital half of reproductive cells, sperms.

Usually, one testicle hangs below the other and it is perfectly normal and nothing to worry about. Testicles are connected to the abdomen with a spermatic cord comprising of blood vessels, nerves, lymphatic vessels and the vas deferens. Spermatic cord holds the testicles and keeps them suspended in the scrotum.

What is testicular pain, how does it feel like?

Testicular pain can sometimes be sharp or sometimes chronic (a feeling like something is pulling your balls inside your scrotum) and can be felt in one or both the testicles. The pain can originate from testicles, abdomen, groin etc depending on the cause.  Testicular pain should never be ignored or delayed treatment because, some of the reasons for the pain may be a medical emergency. Ignoring testicular pain may result in surgical correction or even removing a testicle.

Causes and Symptoms of testicular pain

Testicular torsion refers to the twisting of testicles resulting in twisting of the spermatic cord. The twist cuts off blood supply and as a result, the testicle loses the nourishment and basic supply of oxygen. The ability of such testicles to produce sperms and testosterone reduces by the day and eventually leads to dead testicle that has to be removed.

Testicular torsion typically happens due to an anomaly in the attachment of the testicles by the spermatic cord. This is often referred to as “bell clapper” anomaly or deformity in medical terms. In people with bell clapper anomaly, testicles are freely suspended allowing them to twist spontaneously causing testicular torsion.

Symptoms of testicular torsion include:

Epididymis is a structure at the back of testicles that store and carry the sperm. Inflammation of epididymis is called epididymitis. This is usually a result of an infection and seen in men between the age group of 19 to 40 years. Sexually transmitted infections such as Chlamydia and Gonorrhea are the most common infections that cause epididymitis. The testicular pain caused by epididymitis can vary from mild to severe and is usually felt in one testicle.

4. Growth of lumps or tumors in the testicles

5. Orchitis – Inflammation of one or both the testicles

Mumps are the most common cause of orchitis. Orchitis occurs in males who have not reached puberty. It is important to take mumps vaccine during childhood to prevent mumps caused orchitis condition.

A bacterial infection can also lead to orchitis condition; it is called epididymo-orchitis.

6. Injury to testicles can also cause testicular pain

Though the injury may seem small initially, that can lead to a serious medical condition later.

7. Rupturing of testicles as a result of disruption to the connective tissue covering the testicle can also lead to testicular pain.

The pain caused by kidney stones can radiate into the groin area causing testicular pain.  One may not see any inflammation of the testicles in such case. Other signs and symptoms of kidney stones include:

In our next article, let’s look into the diagnosis and treatment of testicular pain. Remember to see a sexologist near you, if you experience any kind of pain in testicles and that persists for more than a couple of days.