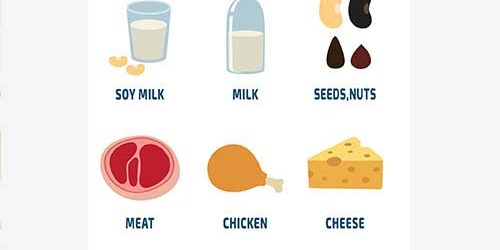 Vitamin B12 and its effect on Men's Fertility

A little over 7% of all men, suffer infertility. About one in 20 men have low numbers of sperm which is one of the common causes for infertility. However, one in every 100 men has no sperm at all. In recent years, studies have shown that vitamin B12 has been shown to affect the sperm and semen quality in men.

Some of the positive effects that vitamin B12 has on semen quality and sperm physiology:

It works in ways to increase the sperm count, enhancing sperm motility, and reducing sperm DNA damages. This may be due to the increased functionality of reproductive organs, decreased homocysteine toxicity, and many other key factors.

Vitamin B12 is also known as cobalamin, due to its high content of cobalt in the core of its molecular structure. It is commonly found in foods such as food, meat and dairy products which can be a perfect source.

Some of the benefits of B12 in men are:

It also works in keeping your blood cells and nerves healthy. Aside from the above-mentioned benefits, B12 helps improve sperm count, concentration and motility by improving your fertility issues. B12 is also vital for the production of DNA, nerves and red blood cells in your body.

An adult needs about 2.4 milligrams of B12 every day for the healthy function of your body.

How B12 affects Male Infertility:

B12 plays an important part in the development of sperm. Studies have shown a link between the lower concentration of plasma vitamin B12 and infertility in men. The results though have been promising, one study has found that when 1500mcg of methylcobalamin was administered to infertile men for a period ranging from 4 to 24 weeks, the total sperm count increased in 53.8% cases and sperm concentration increased in 38.4% cases.

Poor sperm motility, your sperm don’t swim properly which affects its ability to fertilize an egg, resulting in infertility problems. Vitamin B12 may be able to improve motility in certain cases. In a study, it was found that sperm motility and total motile sperm count increased by 50% of the test subjects.

In cases of varicocele, you could have low sperm production and poor sperm quality. Infertile men with varicocele have been found to have the greatest percentage of sperm cells with damaged DNA. One study found out that treating infertile men with varicocele with a host of oxidants including B12 for a period of 3 months has found out that on an average, it was found that patients have 31.3% lesser degraded sperm cells and a decrease of 22.1% in sperm DNA fragmentation after this treatment.

5) Prevents the loss of libido

B12 may not be the primary reason for the loss of libido, but it is worth to check for a deficiency. This vitamin deficiency can result in pernicious anaemia. Loss of libido is also a common fallout of fatigue and depression which have been found to have a link with B12 deficiency.

To help with your male infertility you can obtain vitamin B12 from clams, beef liver, milk, eggs, meat, fish and poultry. Vitamin B12 deficiency has a wide range of consequences along with fertility and sexual problems such as weakness, tiredness, constipation and many more which can lead to the damage of the nervous system.

While you may need vitamin B12, overdosing of this vitamin increases the risk of colorectal and lung cancer in men. Make sure you consult your doctor before opting for any supplements for your body as excessive intakes may cause more harm than good.